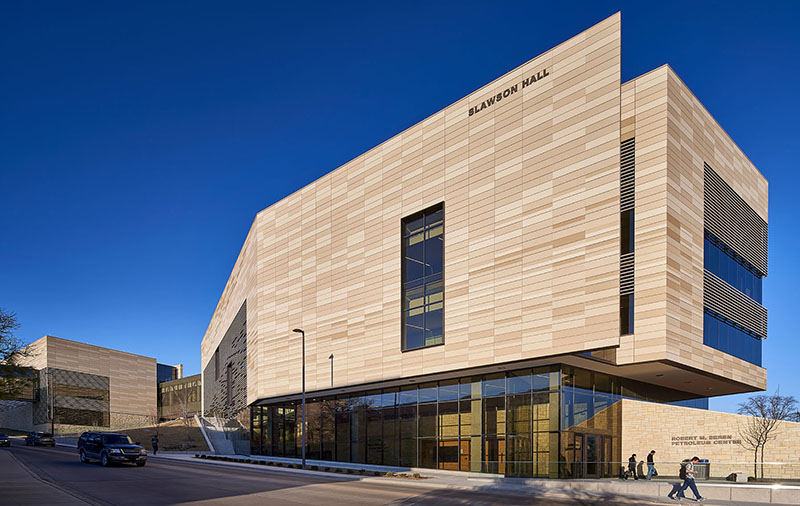 LAWRENCE — From cola-fueled volcanoes to free showings of the movie "Jurassic Park" and demonstrations of high-tech equipment, the University of Kansas Department of Geology will provide a lively introduction to the geosciences and the department's new home during an opening celebration at the Earth, Energy & Environment Center, 11 a.m.-4 p.m. May 5. 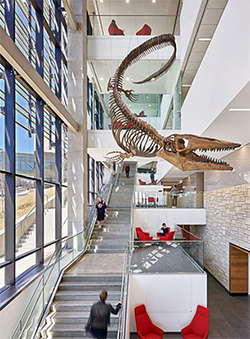 The open house, free and open to the public, includes activities for children and adults. Located on Naismith Drive between Crescent Road and 15th Street and featuring an atrium with a 45-foot-long mosasaur skeleton diving after a sea turtle, the EEEC was dedicated April 25.

"We're so fortunate to have this new facility, which was made possible by the generosity of donors," said Jennifer Roberts, geology department chair and professor. "The open house gives us an opportunity to share this world-class facility, our research and our passion for science with our KU colleagues and the general public. We're pleased to be able to show both the traditional aspects of our field like fossil and rock identification and the modern, highly analytical and technological aspects of the geosciences."

A cola-fueled volcano will be erupting frequently in the G-Hawk courtyard, and Jurassic Park will be shown throughout the day in 164 Ritchie Hall, one of the buildings that make up the EEEC. Demonstrations involve the geoscience disciplines of sedimentary geology, geophysics, tectonics, geobiology, geochemistry and paleontology. People interested in the inner workings of the facility can take a guided tour. Maps are available for self-guided tours. 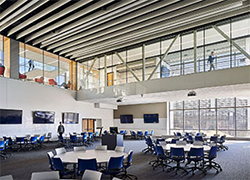 Dedicated to teaching and basic and applied research across the earth sciences, the EEEC encompasses three different buildings and partnerships among the departments of Geology, Geography & Atmospheric Science, Chemical & Petroleum Engineering and the Environmental Studies Program.

Ritchie Hall, at the corner of Naismith Drive and Crescent Road, is named after KU alumni Scott and Carol Ritchie of Wichita, who donated $10 million to the project. Slawson Hall, at the corner of 15th Street and Naismith Drive, is named after Donald Slawson, a KU alumnus from Wichita and a past chair of the Kansas Board of Regents who died in 2014. His family made a $16 million gift for the project. Slawson Hall features the Robert M. Beren Petroleum Conference Center, named for the founder of the oil and gas exploration firm Berexco in Wichita. The Beren Center includes an auditorium for lectures, training, workshops and conferences. The G-Hawk Courtyard, an outdoor learning lab, is located between the two buildings and the other building in the EEEC, Lindley Hall.

Parking for the open house is available at the parking lot between Murphy Hall and the Law School on Naismith Drive between 15th Street and Irving Hill Road.