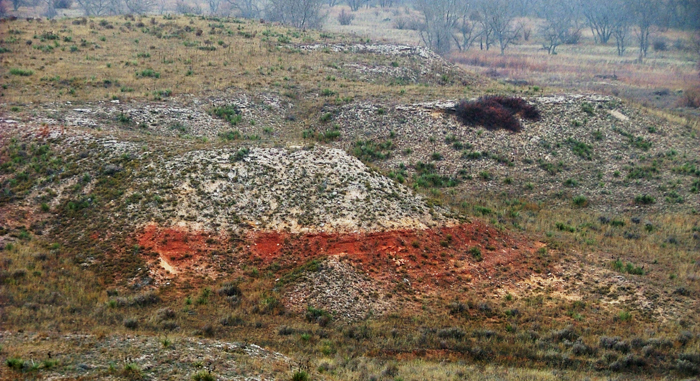 LAWRENCE — More than a century of debate over the age and origin of an outcrop in Southwest Kansas — thought by some geologists to contain the only known Jurassic rocks at the surface in the state — has been resolved, according to a new report by the Kansas Geological Survey at the University of Kansas. 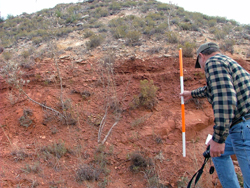 The outcrop in question lies at the base of Point of Rocks, a much-anticipated landmark for 19th century travelers along the Santa Fe Trail’s Dry Route. The prominent bluff, rising above the Cimarron River valley, signaled natural springs in an otherwise arid stretch.

Identifying the origin and age of rock layers, or strata, is a fundamental aspect of geology and geologic mapping.

“Stratigraphy is the branch of geology dealing with the order and position of strata and their relationship to the geologic timescale,” said Jon Smith, KGS geologist and lead author on the report. “It is the organizing principle for nearly all other geologic disciplines.”

Rocks in the outcrop at Point of Rocks, mainly layers of red shales and sandstones, are not Jurassic, the authors of the study determined, but were deposited earlier during the Permian Period, which lasted from about 298 million to 252 million years ago. Northwest of Elkhart in the Cimarron National Grassland in Morton County, the outcrop was virtually the last disputed rock unit on the surface in Kansas.

“The age of these rocks has been in contention for 115 years,” Smith said. “We applied cutting edge techniques to finally shed some light on the question.”

Historically, classifying the rocks has been problematic because they don’t resemble nearby surface rocks and contain no fossils, which provide important clues about the time periods and environments in which rocks form. Speculations about their age ranged from the Permian Period to the later Triassic, Jurassic and Cretaceous periods and were often based on similarities to distant formations already dated in Oklahoma, Colorado or New Mexico.

In this new study, KGS researchers used updated techniques — in particular a new method to measure the distribution of uranium and lead in zircon crystals — not used in previous investigations of the red beds.

Although large zircon crystals are rare, detrital zircon grains composed of tiny worn-down particles are extremely common and widespread in sandstones, shales and other sedimentary rocks. Upon formation, zircons contain uranium but not lead. Over billions of years and at a constant rate, the uranium decays into lead. By analyzing the amount of uranium versus lead in zircons collected from the red bed outcrop, the KGS researchers were able to estimate an age range for the rocks.

“While we don’t know the exact age, what we were able to do was constrain it to a range of ages,” Smith said. “The important message is that we used two different methods to determine the age of the red beds and both provided a date within the Permian Period. The uranium-lead ages, in conjunction with other lines of evidence, have convinced us that these deposits are of the Permian Big Basin Formation.”

The Big Basin Formation, named after a mile-wide sinkhole about 130 miles east in Clark County where the formation was first identified, is the uppermost Permian rock unit in Kansas. Other evidence supporting the finding includes the presence in fractures of copper oxides, which are abundant in North American Permian red-bed deposits, and correlative Permian subsurface rocks recorded in logs from several prior test holes drilled near the site.

The red beds were likely formed from sediments that were suspended in water overflowing riverbanks and deposited on a floodplain. The color, composition, texture and other characteristics of the red beds suggest the flooding was influenced by tidal action in shallow seas covering parts of North America, including portions of Kansas, throughout the Permian Period. By the late Permian, the seas had receded far south of the Point of Rocks area.

In modern river systems such as the Amazon, tides can influence flow as far as 500 miles inland, Smith said.