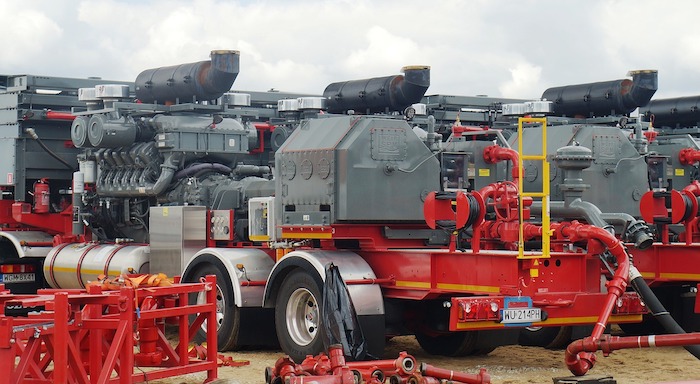 LAWRENCE — Hydraulic fracturing, popularly known as “fracking,” has brought about a new era of energy abundance in the United States, slowing American dependence on foreign oil and creating domestic jobs.

Now, University of Kansas researchers have earned a $3.5 million grant from the Department of Energy’s Office of Fossil Energy in partnership with the Houston-based E&P company EOG Resources and in collaboration with the University of California-Los Angeles to develop a new Smart MicroChip Proppants technology that could make unconventional reservoir development by hydraulic fracturing more efficient for energy producers.

When water is forced into shale rock to produce networks of cracks for extraction of oil and gas, those cracks are held open with sand or other materials, called “proppants.” Masoud Kalantari, KU assistant professor of chemical & petroleum engineering and director of the Computational Earth Science and Smart Analytics Lab, aims to develop “smart microchip proppants,” or sand-grain-sized microchips to be injected into unconventional reservoirs with traditional proppants to give well operators unprecedented precision in visualizing fracture networks in real-time.

“The impact would be transformational,” Kalantari said. “During the past 10 years or so, since the shale boom started in the United States, companies have drilled thousands of unconventional horizontal wells in unconventional reservoirs. Technically, when we frack, we’re pumping water mixed with sand called ‘proppants’ to keep those fractures open — but we don’t know exactly the geometry and extent of those fractures. This project offers an innovative and breakthrough technology for improved subsurface fracture characterization, visualization and diagnostics of unconventional reservoirs.”

The new approach would enable better calibration and interpretation of other indirect diagnostic tools that are being used today for fracture characterization.

“The smart microchip proppants, once injected in the formation, generate real-time data to better evaluate the dynamics of the reservoir, proppants distribution, embedment and the conductive fracture geometry,” Kalantari said. “Due to the complexity of hydraulic fracturing, coming up with the right spacing between the wells makes the optimum development of unconventional reservoirs challenging and consequently imposes huge financial burdens to the oil and gas companies. This technology will support the U.S. operators to maximize the efficacy of recovery from unconventional resources while minimizing the environmental footprint by optimizing the well spacing and improving completion design.”

Because the smart microchip proppant technology has potential for commercialization in coming years, Kalantari said some details necessarily would be kept confidential. However, one planned innovation involves powering the tiny proppant transmitters. Because the microchips are so minuscule — around 150 micrometers (0.0006 inches) — there’s no commercially available battery available that is sufficiently miniaturized.

“There’s no battery small enough, so we’ll develop a tool to put in the well bore and then send electromagnetic energy that will power these smart microchips,” Kalantari said. “When they’re remotely powered, they provide their location signal back to the well bore. This is the way they’ll communicate. It’s like sending thousands of tiny GPS units underground. Each one of them will provide a signal to the location of those microchips. Based on that, you can generate a detailed visualization of how proppants have propagated.”

Kalantari said work under the grant would encompass many disciplines, including petroleum engineering, geology, electrical engineering, materials science and computer engineering. One engineering challenge will involve making the smart microchip proppants resilient enough to withstand the harsh conditions inherent in an unconventional well, where regular proppants can get crushed as fractures close back up.

“They need survivability,” he said. “These are electronic chips in a high-pressure and high-temperature environment, and they need to function. But we don’t care if a few get crushed, because many others will survive, and that would be enough for us to provide the necessary information.”

Kalantari developed the grant proposal in response to a DOE Advanced Technologies for Recovery of Unconventional Oil & Gas Resources funding announcement. He said it represents the largest grant to KU as a lead institution from the Office of Fossil Energy since 2010.

“This has a huge impact on KU’s reputation when we get such a big project,” he said. “It’s going to be a platform for us to go for the next funding opportunity, and we can ask for more for the next project. This is a game-changing project, elevating our prominence.”

Additionally, the new grant will provide for jobs, research opportunities and training for doctoral students and researchers under Kalantari’s supervision.

“This project is part experimental, modeling and also part field execution, so full-time Ph.D. students and researchers will, of course, get practical training and have the chance to work on a novel project that’s not only interest of Department of Energy, but is of interest to almost all major and mid-sized energy companies in the U.S.,” Kalantari said.