LAWRENCE — The late KU professor Robert Wilson’s passion and preeminent scholarly achievements in teaching and studying the evolution of small mammals have inspired gift commitments totaling $950,000 from colleagues, friends and family — in particular, three women. The gifts will benefit the Biodiversity Institute and the Natural History Museum at the University of Kansas. 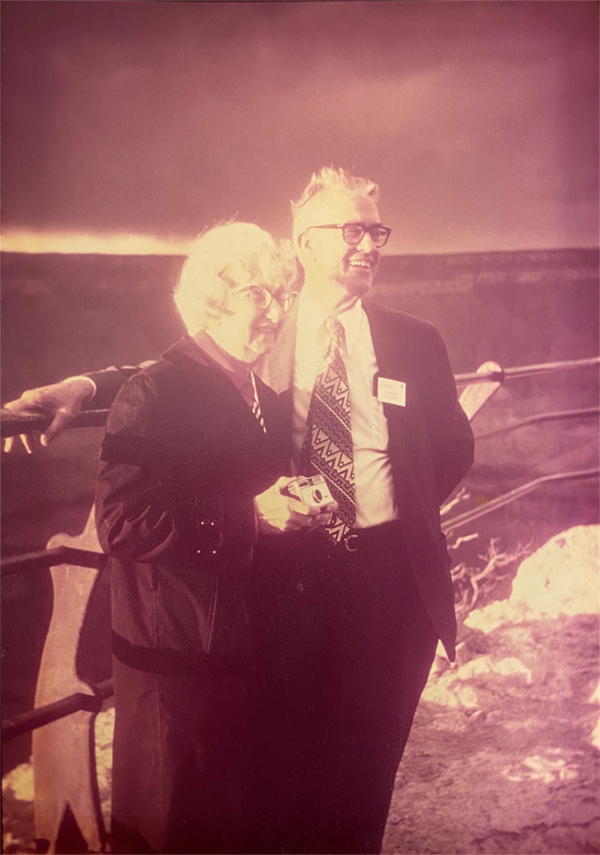 Margaret Wilson, his daughter, along with her late cousin, Frances Fefes, and her close friend and fellow KU librarian, Sally Haines, have given $950,000 in outright and estate gifts and pledges through KU Endowment to the Robert W. and Geraldine Wilson Museum Fund, which, when fully funded, will create a faculty-curator position for research, teaching and graduate training in the evolutionary dynamics of mammals, their changing environments and their roles in sustaining global biodiversity.

All three women were inspired by Robert Wilson’s lifelong career in teaching paleobiology and understanding mammalian evolution. Margaret Wilson, who lives in Lawrence and retired from KU as a librarian in 2013, established the Wilson Museum Fund in 2007 to recognize and continue her father’s enormous legacy of research and undergraduate and graduate education.

Robert Wilson, a California native, was a professor of zoology and associate curator of vertebrate paleontology at the KU Natural History Museum from 1947 to 1961 and emeritus professor from 1977 until 2000; he died in 2006. As a child, Margaret Wilson would often go to the museum after school, having grown up immersed in her father’s world of the museum and mammalian paleontology.

“Haunting the halls of the museum is a very fond childhood memory,” she said. “The sights, the sounds, the smells — the museum had a very distinct smell. So it’s a very special place for me. The fund recognizes both of my parents, because as much as students were an integral part of my father’s life, my mother, Geraldine, played a key role in his success as an educator. She mentored his students, who often came to the house. She was their mom away from home.”

Leonard “Kris” Krishtalka, director of the Biodiversity Institute and professor in the Department of Ecology & Evolutionary Biology, said Robert Wilson had an outstanding, permanent influence on paleobiological research and generations of future scientists.

“He inspired countless students,” Krishtalka said, “many of whom became world-renowned scholars, including Terry Vaughn and Mary Dawson, a 2007-2008 KU Alumni Distinguished Achievement Award winner. The Wilson Museum Fund is a lasting legacy in his honor that will continue his work.”

Margaret Wilson had a close connection with her cousin, Frances Fefes, who was a lifelong resident of California until she moved to Lawrence when her health began to fail to live near Wilson. Fefes left a gift in her estate for the museum fund.

“Our fathers were brothers,” Wilson said, “and my dad went to their home for Sunday dinner every week for years.  Frances grew up with him.”

Wilson’s close friend, Sally Haines, of Lawrence, has been a KU librarian in the department of Special Collections at the Kenneth Spencer Research Library since 1966. Her own father was a naturalist.

“I’d always intended to leave something to the museum, and I’ve known Margaret and treasured her friendship for a long time,” Haines said. “I want to support science and contribute to my favorite subjects, and the museum is one of them.”

KU Endowment is the independent, nonprofit organization serving as the official fundraising and fund-management organization for KU. Founded in 1891, KU Endowment was the first foundation of its kind at a U.S. public university.

Photo: Robert and Geraldine Wilson at the Grand Canyon in 1974. Image courtesy of Margaret Wilson.

Why KU Geology
Apply »
Internationally recognized programs
Millions in grants and contracts for research
Generous financial support for students
Research projects that stretch to Antarctica, Greenland, and numerous points in between
Birthplace and home of Treatise on Invertebrate Paleontology
A thriving field program that sends undergraduate and graduate students throughout the world
Industry recruiters who visit annually to hire KU Geology's graduating students
KU Today
Jobs