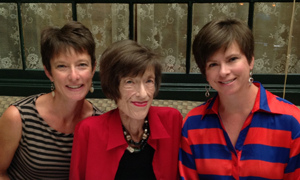 The gift will create the endowed Richard M. and Barbara Werbe Meek Memorial Fund. Barbara Meek earned a bachelor’s degree in education from KU in 1960. Her husband, Richard Meek, also graduated from KU, where he earned two degrees in geology — a bachelor’s in 1958 and a master’s in 1962. A geophysicist, Richard had a long career with Exxon as a technical exploration manager, traveling the globe to work on oil and gas discovery projects.

Shortly before his death in 1999, Richard Meek was in the hospital facing a serious medical procedure. He asked Barbara to make estate plans to leave a gift for KU. “Richard made it very clear that this is what he wanted to do,” said Barbara. “He felt very strongly that an unrestricted gift was the most beneficial way to give to KU, because it gives the university the flexibility to decide how to best use the funds.”

Chancellor Bernadette Gray-Little expressed appreciation for the gift. “Richard and Barbara’s generosity will make a big difference for the University of Kansas as we continue our mission of educating leaders, building healthy communities and making discoveries that change the world,” she said. “We are honored and humbled to receive this gift from two loyal Jayhawks.”

Richard grew up in Newton, and Barbara grew up in Kansas City, Mo. They met at KU at a sorority/fraternity dance, and he called her for a date later that evening. The couple were married nearly 40 years before his death. Their Jayhawk legacy continues through their family. One daughter, Mindy Meek Piontek, of Baton Rouge, earned a bachelor’s degree in English from KU in 1991. Their other daughter, Sheryl Meek Lee, of Boise, Idaho, has a son, Robert Lee, who currently is a sophomore at KU.

The Meeks’ earlier gifts to KU Endowment for KU include support for the James A. and Rowena E. Peoples Scholarship in Geophysics.

The gift commitment counts toward Far Above: The Campaign for Kansas, the university’s $1.2 billion comprehensive fundraising campaign. Far Above seeks support to educate future leaders, advance medicine, accelerate discovery and drive economic growth to seize the opportunities of the future.

The campaign is managed by KU Endowment, the independent, nonprofit organization serving as the official fundraising and fund-management organization for KU. Founded in 1891, KU Endowment was the first foundation of its kind at a U.S. public university.