LAWRENCE — Layers of limestone, coal and other rocks formed about 310 million years ago and now found on or near the surface throughout Bourbon County are featured on a newly revised map available from the Kansas Geological Survey. 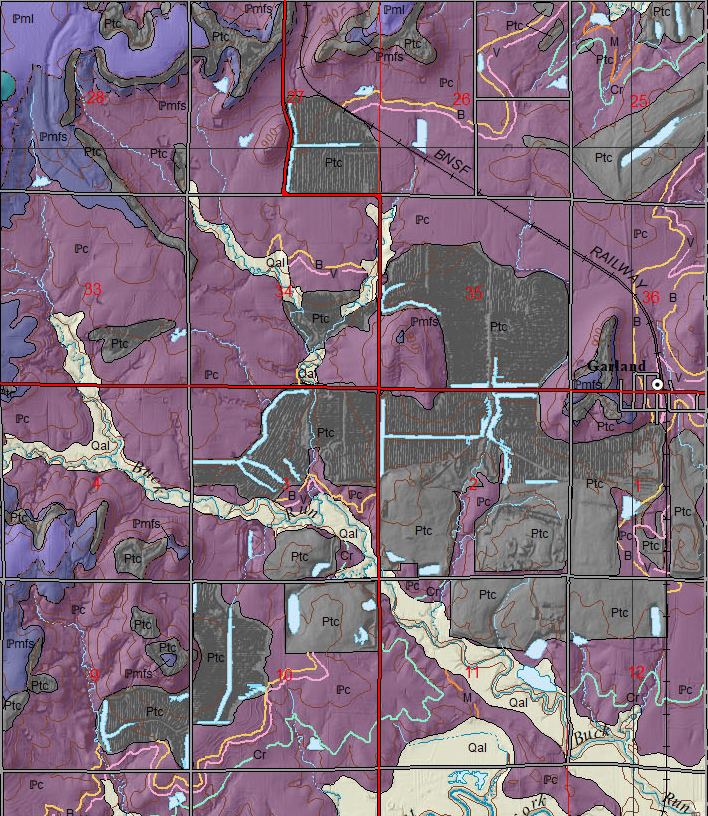 An update to the KGS Bourbon County geologic map published in 2002, the new map illustrates the distribution of coal resources and location of coal-mined areas in greater detail. Shaded relief also has been added to accentuate hills and valleys, giving the map a three-dimensional quality.

Bourbon County’s surface geology is mainly characterized by Pennsylvanian-age rocks that crop out at the surface or directly underlie the soil and vegetation. The rocks range from marine shales, siltstones, sandstones and fossil-bearing limestones to coal formed from thick vegetation in a swamp environment. During the Pennsylvanian subperiod, which lasted from 323 to 299 million years ago, the state as a whole was often inundated by shallow seas that rose and fell.

“An unusual group of marine fossils called chaetetids occur in the Pennyslvanian rocks in Bourbon County,” West said. “Originally thought to be corals, but later classified as sponges, chaetetids are calcareous, encrusting organisms that can build into large columns and domes that often serve as a substrate for other invertebrates in a reef-like setting.”

Coal mining, which began in the mid-19th century in Bourbon County near Fort Scott, continued into the early 21st century. The last coal mine in the state, in neighboring Linn County, discontinued operations in 2016. For decades, southeast Kansas coal was used for residential heating, railroads, cement manufacturing and power plant energy generation.

“Coal mined in the county, as well as most of southeast Kansas, was a high-quality bituminous coal, but it commonly had a high sulfur content,” Brady said. “In total, Bourbon County produced approximately 8 million tons of quality coal. Over half of that was mined in the last 60 years.”

Although there was a small amount of underground mining in Bourbon County, most of the coal was produced through strip-mining, in which power shovels are used to strip away overlying soil and rock to expose coal beds too thin to be mined underground.

Besides the map, the 62" x 42" sheet contains a cross section and an illustrated rock column. The cross-section depicts a vertical slice of subsurface rock layers along a line running east to west across the middle of the county. The rock column shows the order rock units were deposited over time and a description of each unit. Towns, roads (from highways to unimproved roadways), elevation contours at 20-foot intervals and township and range boundaries also appear on the map. The scale is 1:50,000, so that 1 inch on the map equals about 3/4 mile of actual distance.

The map, “Surficial Geology of Bourbon County, Kansas,” can be accessed online.

Paper copies of the map will be available when the Kansas Geological Survey fully reopens later this year. Contact the KGS publication sales office at 1930 Constant Ave., Lawrence, KS 66047-3724 (phone 785-864-3965, email pubsales@kgs.ku.edu) if you want to be notified when a printed version of the map is available.

The cost is $20 plus shipping and handling and, for Kansas residents, sales tax. More information about county geologic maps and other KGS products is available at the KGS website.

The Kansas Geological Survey is a non-regulatory research and service division of the University of Kansas. KGS researchers study and provide information on the state's geologic resources and hazards, including groundwater, oil and natural gas, rocks and minerals, and earthquakes.